England made the perfect start storming to a 4-0 lead before Hungary found the back of the korf 5 minutes into the match. 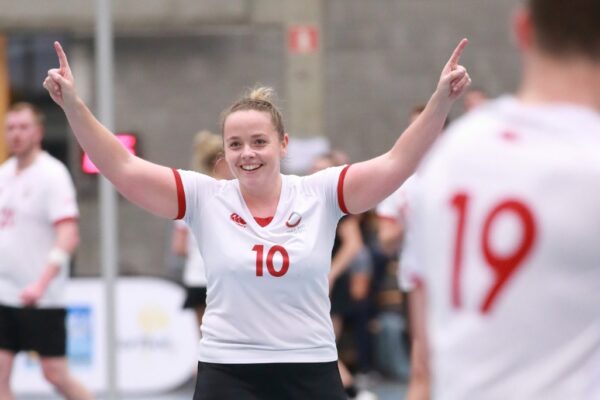 Brennan scored England’s opening goal after just 20 seconds, and quickly followed up with a second in the very next attack after a brilliant pass from Jones found Brennan in space at the side of the court. [2-0].

D.Brooks quickly extended England’s lead to 3-0 before Jazmyn Mezey from Hungary missed a penalty.  Amy Turner won a penalty and  didn’t make the same mistake as Mezey and coolly converted [4-0].

Hungary, encouraged by several decisions going their way, began the fight back with four unanswered goals to level the scores at 4-4.

Brennan then scored her third goal of the match immediately from the restart with a neat drop off goal from the back court. [5-4]

England were playing with determination and a calmness which was reassuring. Always looking like they were in control. Their attacks were patient and well structured. Bedford was dominating his opponent in the rebound, ensuring England retained possession and recycled the ball.  It wasn’t long before Jones scored the first of her three goals of the game [6-4].

Two goals from Sam Brooks and a converted penalty from Bedford meant England went into the half-time break leading 9-6.

Brennan wasn’t able to immediately replicate the start to the first two quarters with a goal – this time it was Viktor Zsolt from Hungary that scored the first goal of the half from the penalty spot [9-7].   Quickly followed by another Brennan goal from open play in the very next England attack [10-7].

Bedford then scored a long shot from the side-lines of the court much to the delight of the supporters in the arena and the England bench [11-7].

Kathryn Brooks was then fouled by her opponent during one of her trademark attacking moves sending her to the penalty spot. Brooks coolly converted the resulting penalty [12-7] to extend England’s lead to 5 goals.

Jones scored her second goal of the match on 27 minutes which was then quickly followed by a brace of goals from Palfreyman who swapped in for S.Brooks a few minutes earlier [15-9].

It was at this point England head coach Rob Williams called his first time-out. With 6 minutes remaining England were looking strong and in control, but at this level things can change very quickly…

Hungary scored one more goal after the time-out [15-10] and crucially then missed a penalty. Jones then demonstrated how to take and score a penalty of her own to score her third of the match [16-10]

It was a tough match. England had to dig deep to get the result, but overall showed great composure and a calmness throughout the match.

England are back in action tomorrow (Wednesday) in their final pool match against Portugal at 4.30pm UK time.

Missed the match? Watch it again: