Graham Crafter has stepped down from his roles as a Board Member and Chair of the Competitions and Referees Sub-Committees. However, he will be continuing as an ordinary member of those Subcommittees. He also steps down as the England Korfball Disciplinary Officer.

England Korfball would like to take this opportunity to acknowledge and express our gratitude to Graham for his many valuable years of service to the organisation.

When celebrating its 60th anniversary, the British Korfball Association observed the challenge of doing justice to Graham’s contribution to the sport and 15 years on, it is an even greater challenge. 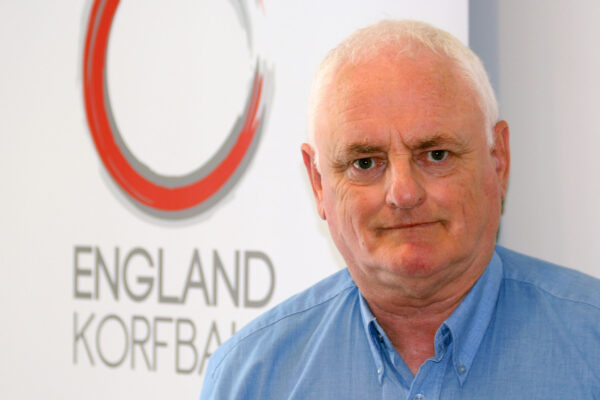 Graham’s first contact with Korfball was in 1977, watching a demonstration game between Kent and Essex at the West Malling Airfield, Kent (not far from his home), as part of the Royal Jubilee Celebrations.

Inspired by this he soon started playing Korfball at Palace, before moving to Ightham and, with his wife Valerie, then forming their own club – Merlins – in 1979. Since joining the BKA Exco in 1982, Graham has had an extensive career with the IKF, BKA and later EK. Roles have included IKF General Secretary, BKA General Secretary, BKA Competitions Officer and in more recent times Chair of the EK Competitions and Referee Subcommittees and EK Disciplinary Officer. 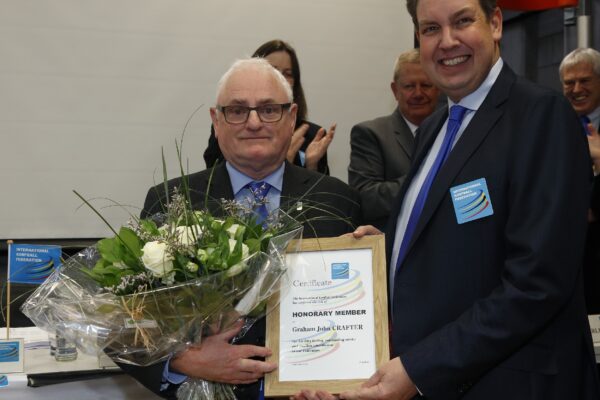 In his most recent role as Chair of the Competitions Sub-Committee he has overseen the successful introduction and implementation of the EKL Promotion Divisions as well as the professionalism now seen in the running of the competition at the National League playoffs weekend.

Graham contributed to the successful devolvement of the BKA into EKA, WKA and SKA. In addition to governance and administration roles Graham has had a successful refereeing career including such highlights as refereeing the 1987 World Championships Finals in front of a crowd of 7,500. He was the referees’ coordinator for the BKA and EK for many years. With Valerie, he produced the IKF and BKA magazine for many years.

Graham has been a great ambassador for Korfball world-wide and has been central to the expansion and development of the sport during his time with the IKF. His knowledge of Korfball is second to none and has consistently been a “go to” person for information, advice and assistance. The high esteem he is held in by the korfball community has been demonstrated by his receipt of the Marion Atkinson Trophy (1993) and the inaugural Jan Hanekroot award (2005) for lifetime services to korfball.