Birmingham City and Cambridge Tigers earned promotion to the top level of the England Korfball League, joining Bearsted who made sure they were not relegated.

The second day of the promotional play-offs at the K2 in Crawley saw both the promoted sides seal their success after their first games as Cambridge defeated Croydon and Birmingham saw off Bearsted.

Cambridge did suffer one defeat against Bristol Thunder while Birmingham ended the play-offs with another win, seeing off Croydon.

The day’s other match ended in a win for Bearsted against Bristol.

Bearsted got their second win of the play-offs after putting together a clinical performance against Bristol Thunder.

A superb start was made by Bearsted as Emma Stanley scored with the first attack of the game with a running in shot making good use of a feed.

Bristol had several chances, but were unable to get on the scoreboard and a long shot from Chris Martin doubled Bearsted’s lead.

Jake Cooper managed to get Bristol going when his drop-off shot went in, but their opponents got their two goal advantage after David Wiseman collected his own missed shot and dished a pass to Emma Sackett, who made no mistake from two metres out.

However, Bristol managed to take some control in the game and got back on level terms thanks to two excellent long range shots from Ramzi Barbir.

Between Barbir’s goals, Laurie Fabian missed a penalty for Bristol.

With the scores at 3-3, Will Alberton failed to convert a penalty for Bearsted, but they would take the lead before half-time as they turned-over the ball as Britstol defended and Sackett got a shot in.

Another successful drop-off from Cooper got Bristol an equaliser 15 seconds into the second half, but from here, Bearsted took the game away from their opponents with five unanswered goals.

Stanley grabbed her second of the match before Alberton scored a penalty and then Sackett completed her hat-trick.

Rebecca Fitch stopped the rot for Bristol as she scored from a free pass, but with just over five minutes left, the game looked to be up for them.

The scoring was completed by two penalties for both sides, with Alderton bagging them for Bearsted while Barbir found the target for Bristol.

Cambridge Tigers kept their winning run in the promotion play-offs going with six goals from Josh Dawes helping them to a 11-7 success over Croydon.

Both teams had spells with the ball in attack in the first few minutes, but neither could find the target despite a flurry of shots.

Dawes broke the deadlock though with a long distance effort for Cambridge before good use of a feed set up a goal for Rory Haughan to make it 2-0.

Lucy Northfield had a chance to make it 3-0, but missed a penalty and this was punished by Zu Omar at the opposite end as he converted a penalty for Croydon before Anna Jeanes got an equaliser.

A penalty from Dawes put Cambridge back ahead only for Luke James to find the target from the back of the court, but Northfield completed a passing move to give the advantage back to her side.

Omar got another equaliser for Croydon, but the Dawes scored from a penalty to make the half-time score 5-4.

Once again, Croydon found an equaliser not long into the second half via a penalty from James and they then took the lead as Omar found the target.

Cambridge were having a lot of time in attack, but it seemed luck was not on their side as their shots kept hitting the korf and not going in and at the other end, Kay Swygart made it 7-5 to Croydon.

However, there would be a massive shift in momentum as Cambridge found their scoring touch and took the game by the scruff of the neck, scoring six in a row to see them to victory.

Dawes got two of these from the penalty spot and also bagged one after shaking off his defender and finding himself in acres of space.

Some excellent collecting work in attack set up a chance which Northfield converted and a free pass was finished off by Thomas Northfield.

Andy Davies’ hat-trick helped Birmingham win a third play-off game which they managed to keep a clean sheet in the second half en route to a 9-3 triumph over Bearsted.

Andy Davies opened the scoring for Birmingham before Bearsted’s Emma Denton got an equaliser from behind the basket.

It stayed 1-1 for a while as the game became scrappy, but Zach Catterall got the scoreboard ticking again from the penalty spot after a foul during a free pass.

Bethan Phillips got Birmingham on level terms and Jess Beale had a golden opportunity to gave the Midlanders the lead with a penalty, but she missed.

Denton was able to find the target for Bearsted though to give them the lead.

It would be Birmingham who went into half-time with the lead though with a long range efforts going in from Davies and Phillips.

Rick Scowcroft missed a penalty inside the last 10 seconds of the half, but the Birmingham player did better after the break with a superb goal from distance.

Davies completed his hat-trick not long after with a drop-off shot set up from a free pass and Birmingham’s lead moved to four points thanks to a penalty from Beale.

Bearsted were struggling in attack as Birmingham’s defence put pressure on them and the gap increased when Tom Brady timed a running-in shot perfectly.

The struggles in attack for Bearsted continued as Catterall missed a penalty before another good chance in front of the korf was squandered by Ayishah Chaudry.

Their misery was compounded with just over two minutes remaining as Adam Waide scored a penalty to round-off the scoring in the match. 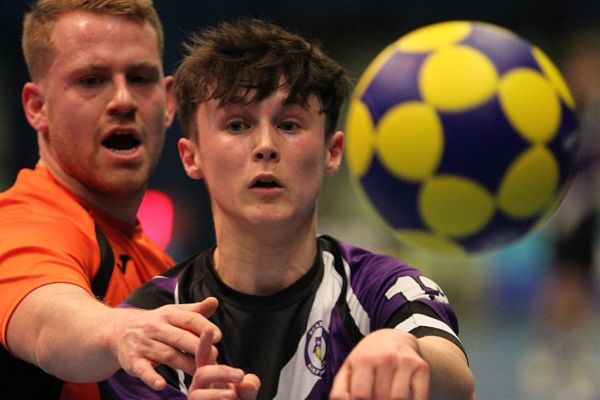 Bristol dominated the first half as they took a 9-4 lead into the interval.

Chris Rhodes gave Cambridge the lead, but Bristol went on a six goal streak to take control of proceedings.

After missing a long shot, Laurie Fabian followed it up and received a pass from the collect to equalise and then Rebecca Kjaedegaard found the target twice with runners.

Fabian added a second to his tally from mid-range and Alex Forrest got on the scoresheet after finishing off a lovely passing move.

Angus Davidson pivoted under the korf to find room to score, making it 6-1, but Cambridge managed to halt the momentum with penalties from Ross Thomson and Thomas Northfield.

A long range effort from Forrest went in and Davidson made the most of a free pass to push Bristol’s lead back to five goals.

Rory Haughan cut the deficit after Thomson missed a penalty, but the half finished with Forrest scoring again, making it 9-4 at half-time.

Cambridge got the three goals after the break with another penalty going in from Northfield, Haughan scoring after a long spell in attack which wore Bristol down and then a running in shot from Daisy Llewellyn.

Some pressure had now been applied to Bristol and they responded with a lovely long range shot from Rebecca Fitch to edge three goals ahead again with 10 minutes left and she followed this up with a similar chance from near the sideline.

Davidson kept the scoring going for Bristol with two for himself, one coming from the penalty spot, to put his side six goals in front with five minutes remaining.

Ramzi Barbir came on as a substitute and got Bristol’s 14th with a shot from the corner and Fitch made the final score 15-7 with her third long range effort.

The final promotion play-off match went the way of Birmingham as they proved too strong for Croydon on their way to a 16-9 win.

Croydon took the lead with a penalty from Luke James before Birmingham went in front after Merrick Lloyd scored from long range and Rick Scowcroft cut through the defence with a fast paced attack.

Scowcroft got another after Birmingham had a spell in attack, but Sarah Withers made it 3-2 with a good shot from near the sideline.

Lloyd restored Birmingham’s two goal lead with a shot from the back of the court, but this was cut again when Andy Withers collected a shot from Kim Munro to score under the post.

There was an almost instant reply from Scowcroft though to make it 5-3 before Dom Bradford scored from behind the post.

Rachel Flight missed a chance from under the korf, but the Birmingham made no mistake before the interval when a similar opportunity came her way.

Jess Beale got proceedings in the second half off to a good start as she broke free in attack.

Sarah Withers got a run in under the post to make it 7-5, but Simon Waide was given loads of space to shoot from close range for Birmingham.

Chris Mannix missed a penalty to extend the lead and Alex Burr then got one back for Croydon.

Birmingham then got the next three goals to make sure of the victory as Simon Waide, Beale and Mannix took the team’s tally to 11.

Munro and Stephen Gooch scored either side of a goal from Waide, but Birmingham pushed ahead again with another effort from Waide along with a Mannix penalty and Lloyd’s shot from the sideline.

Bradford got a consolation for Croydon from a free pass, but another Mannix penalty in the last few seconds made the game 16-9.