These are England Korfball’s Lockdown Legends.

The past 18 months have been challenging for us all on many levels. England Korfball wants to celebrate and highlight the individuals, and clubs, who went over and above to support the physical and mental wellbeing of their club members,  communities or families throughout the various UK lockdowns.

With korfball coming to a pause, many of our local teams got creative in the ways they kept their members active, as well as engaging new ones.

In a change to our normal annual award categories, for 2021 only we launched Lockdown Legends which was a way to thank and recognise the fantastic work that clubs and volunteers have done since May 2020.

We received 29 nominations from people across the country and have compiled them together to showcase the selfless and inspirational stories from across the sport.

The below showcases nine of the nominations who were reviewed and chosen by a panel of England Korfball subcommittee members. However, we are aware that there are many more Lockdown Legends out there, and your efforts do not go unnoticed.

So, to our Lockdown Legends, nominated or not, THANK YOU!

Korfball Club in the Southwest area

The first Lockdown Legend award goes to Bristol Thunder Korfball Club for their efforts in keeping members active, both physically and socially. Individuals in the club arranged regular fitness sessions on zoom for seven weeks during the first lockdown as well as weekly club quizzes and Taskmaster socials.

When outdoor training was allowed, coaches organised the club into ‘pods’ of six. One member recalled it as being a “mental release rather than a physical activity release”. To encourage competition, they organised inter and intra pod competitions, playing in fancy dress and giving awards for the most ‘creative’ goals. Fitness competitions were also introduced where teams had to run or cycle to add miles to their team total and at the end of eight weeks a winner was chosen. The committee were proactive in reading the government guidelines and organising activities that aligned, maximising whatever was allowed at the time. The club also made an active effort to recognise big milestones in members’ lives. For example, club cards and gifts were sent to club members who were new parents during the pandemic.

One member thanked Bristol Thunder’s efforts and commented that their actions gave “hope to so many members” and provided “that social connection and sense of community that they otherwise wouldn’t have had”. 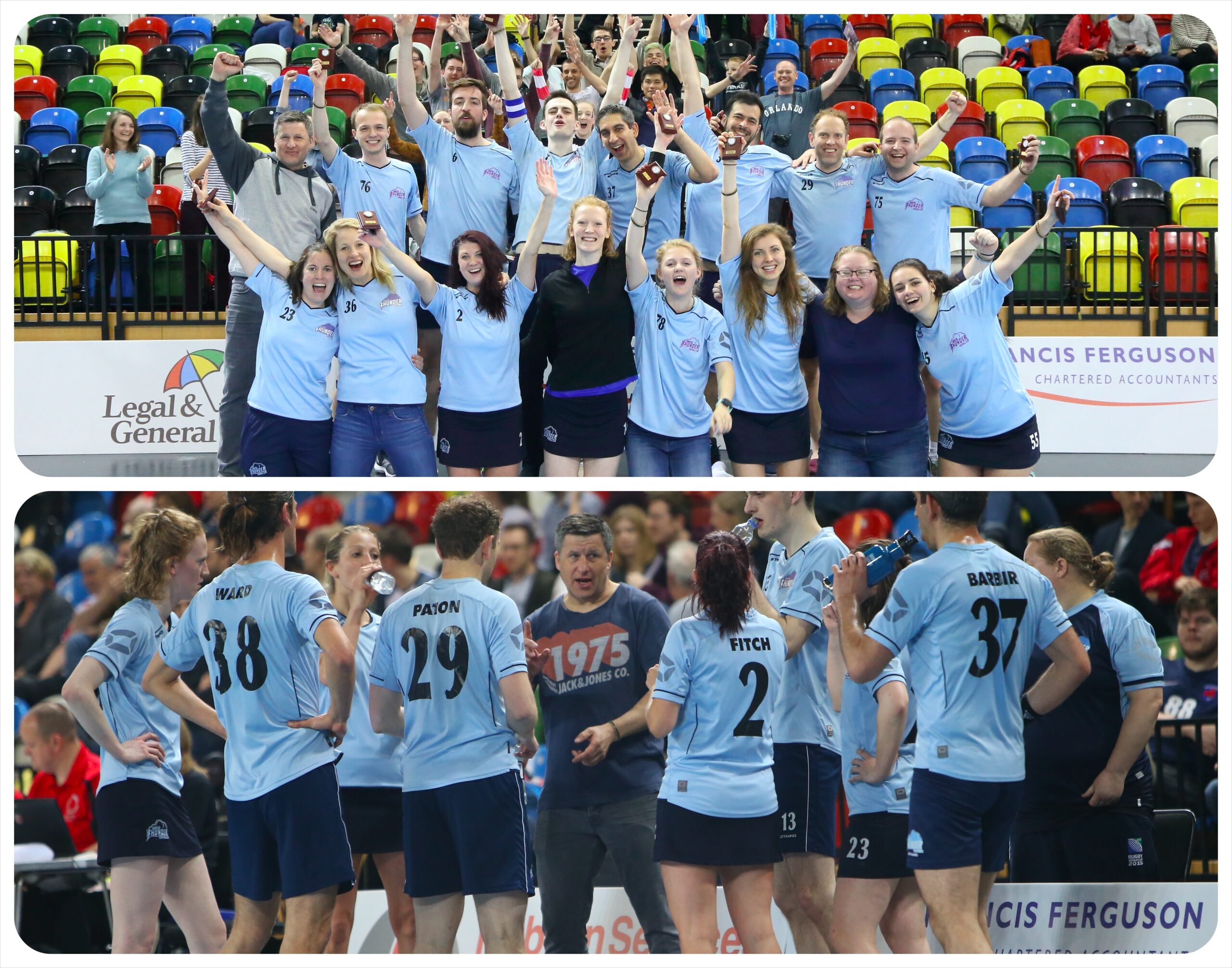 Emma and Steph had to dig deep into their creativity and imagination to come up with virtual social ideas, which one team member commented that “they both absolutely excelled!” They organised weekly quizzes, a “night at the races” evening, a murder mystery evening and member challenges which involved tasks such as “how many T-Shirts can be put on in 60 seconds” or who could create the best trick shot video. Other socials included running an end of season awards evening, board games night, and a (virtual!) bake off.

There were also fitness related challenges and Sunday morning HIIT sessions and they were quick in organising in person sessions as soon as members could train again in person. Thank you, Emma and Steph, your efforts are truly appreciated! 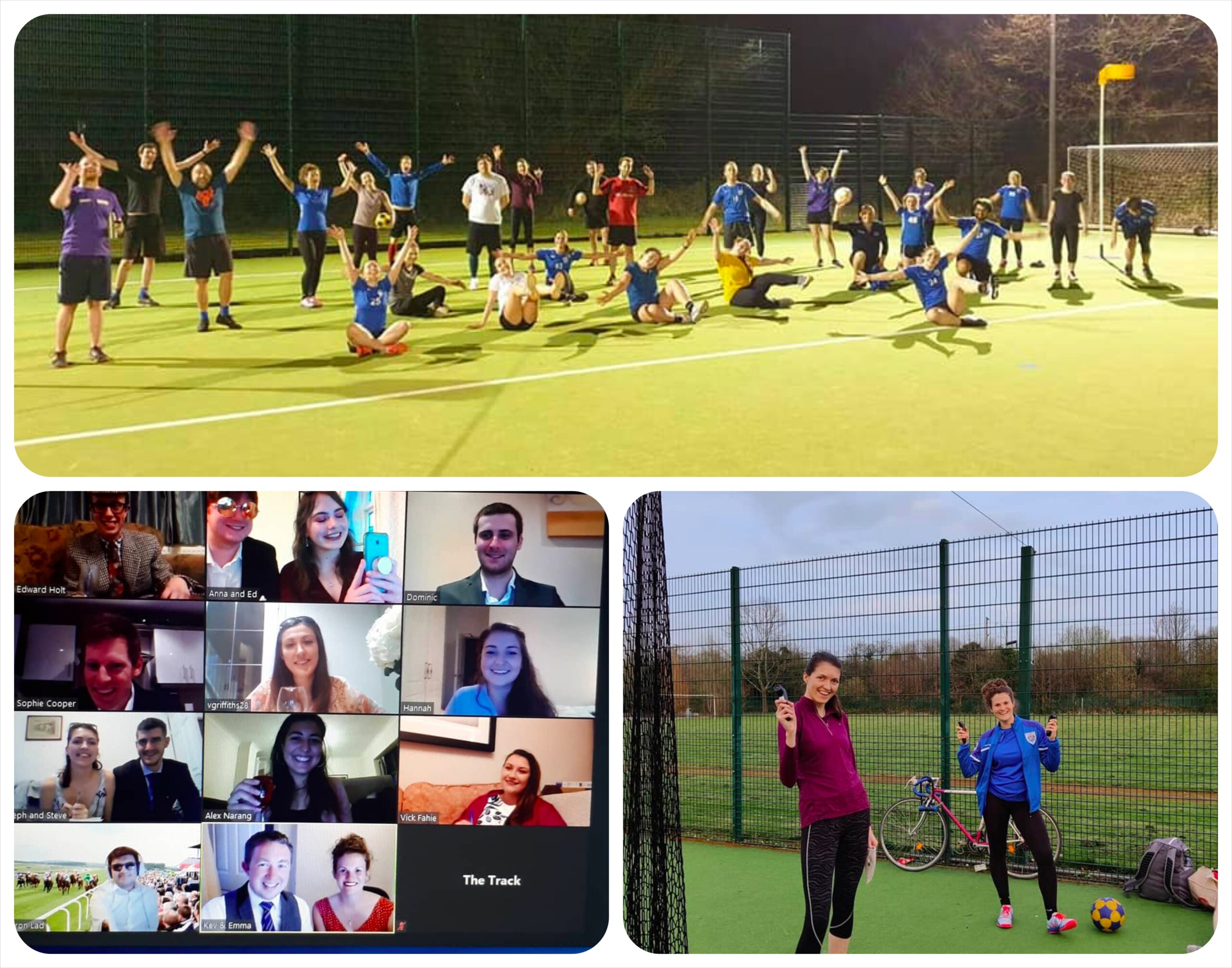 Norwich City engaged players over lockdown in several ways. Zoom fitness sessions were started by Joe with guest sessions from other squad members. These were attended not only by adult club members but juniors and new members alike. One member praised Joe as being “instrumental in supporting our club members in keeping their fitness and sports up”. Joe engaged members in a creative way by adding extra challenges where members could earn points and prizes which ran twice a week. NCKC also arranged ‘Boys v Girls’ challenges that could be completed with their families or on their daily walks. Socially, the social secs organised events such as a virtual escape room, Taskmaster challenges, a virtual bake off and of course, quizzes.

One parent remarked that Joe and NCKC gave their Korfball loving daughter and the club “purpose” by keeping her and the whole club engaged, communicating, interactive and competing.

“Joe doesn’t realise how much he helped my daughter through lockdown. He is marvellous.” 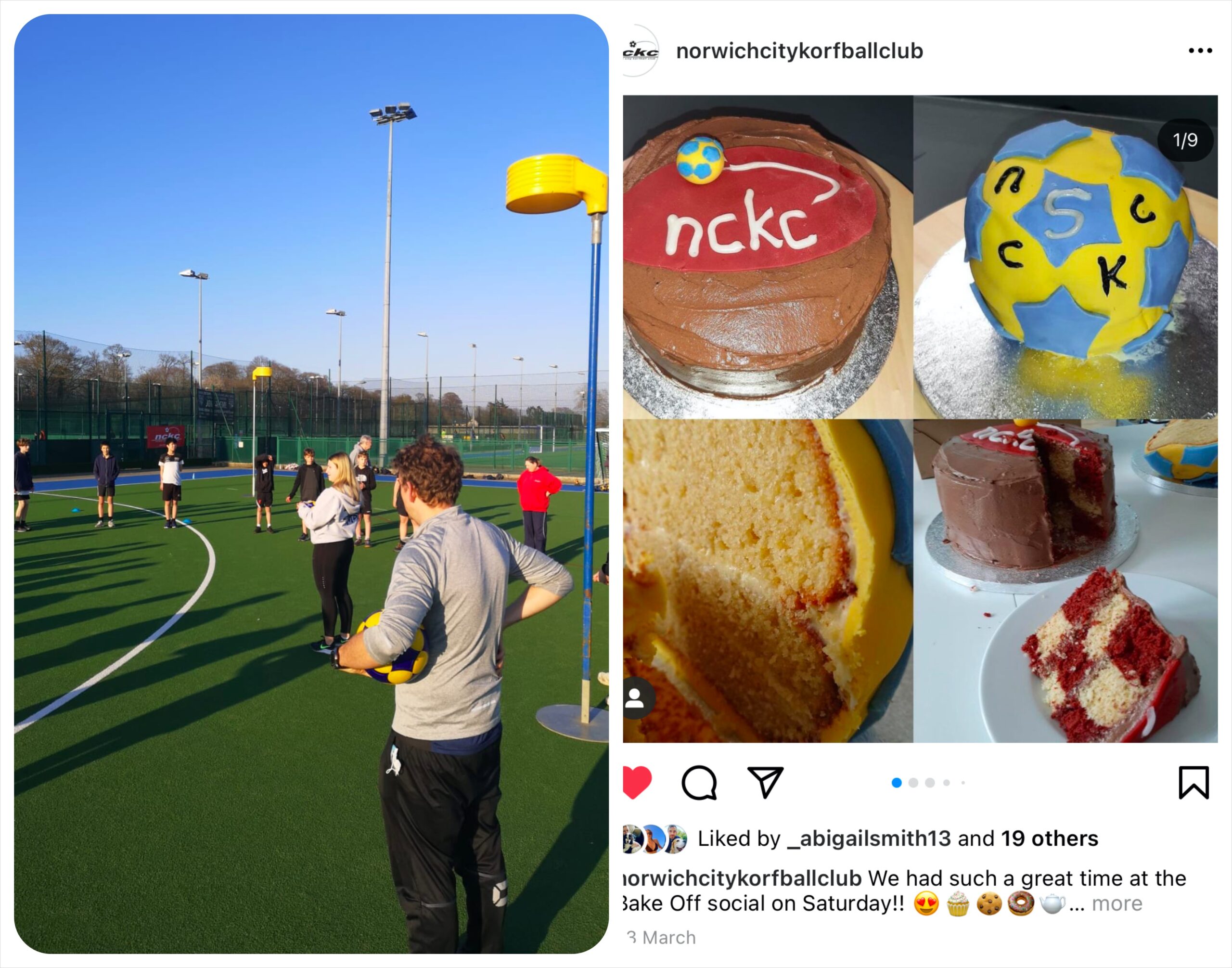 Leeds Hurricanes was established in 2019 with hope to start playing in the 20/21 YKA League. Unfortunately, due to COVID they were unable to showcase their talents. Despite this, the committee and club members still provided support and a sense of community throughout the lockdowns.

There were weekly quizzes where members would take turns hosting, fitness challenges to bolster motivation and Zoom exercises classes. In August 2020 they came together to tackle the Yorkshire Three Peaks challenge alongside a local gymnastics club. They selflessly did this to help the gymnastics club raise funds as they had been hit hard financially during lockdown. In total they raised £1,405 for them.

Thank you, Leeds Hurricanes, for making a difference to your club members and others around you. 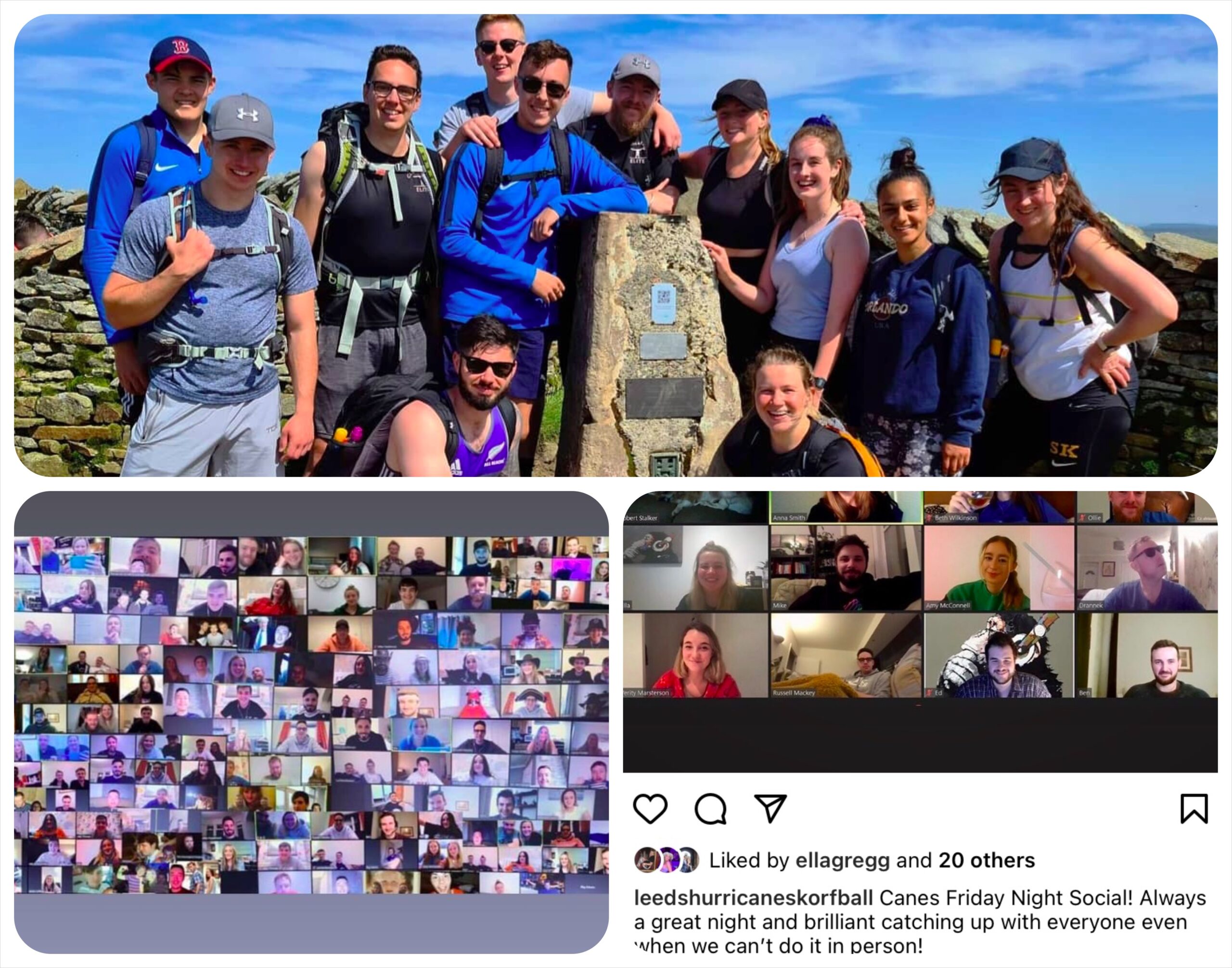 Lancaster University Korfball Club’s efforts were invaluable in keeping members interacting during the lockdown restrictions. They hosted online fitness sessions, named ‘Korfwicks’, which helped members keep fit and provided much-needed social interaction for their members. They also gave back to the local community that was struggling through a charity fundraiser where members ran the distance of every league game and back, including the cancelled Attila tournament which raised £500 for Cancer Care Lancashire. In addition, the club held a Korfball session for children bereaved by cancer.

A particular member of their club was mentioned: Luke Ravenscroft. Luke worked tirelessly over the past 18 months by taking numerous roles in addition to his studies. Not only is he Chairman but also Development Officer and National Competitions Manager for the British Student Korfball Association. He continually pushed Equity, Diversity and Inclusion within the club and community in a number of ways, and this is an example of three (out of many!)

And this does not cover all that Luke has contributed to the club, university, and wider society, well done Luke! 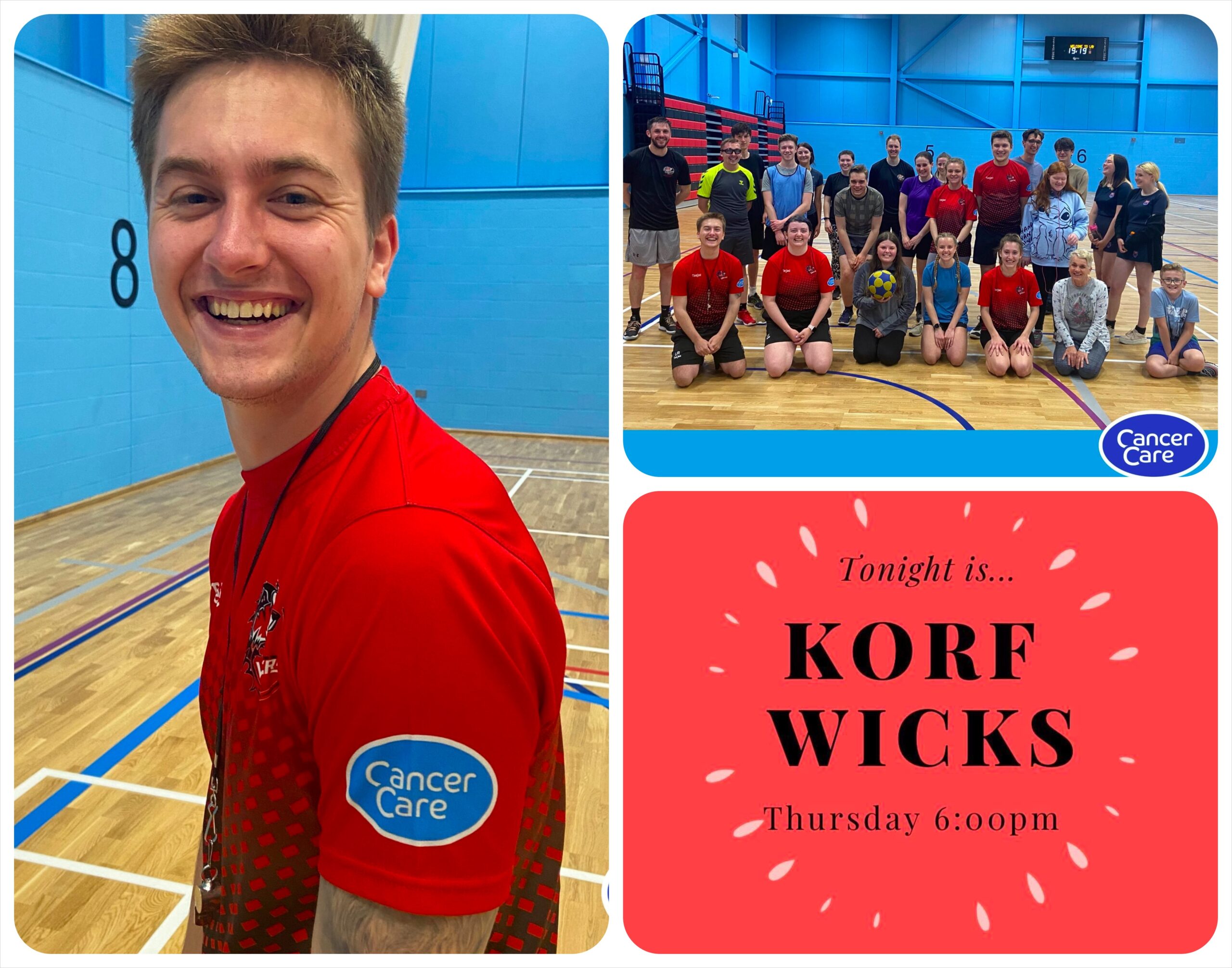 Protecting the physical and mental health of members

Named by their members as a “caring and fun club”, Manchester Korfball Club came together to protect the health and wellbeing of their members. They ran three running challenges, whereby they supported each other so those who were less confident or experienced felt motivated to participate. First, they ran a series of individual challenges to suit different abilities and then a team challenge running 6km for every day they’d not been able to play. Lastly, they took on local korfball clubs in their ‘Miles for March’ challenge. Aside from Korfball they entered a rounders league and a cricket tournament, took on the Yorkshire Three Peaks Challenge and started their own tennis club.

On a social level, they kept their members active by regularly hosting zoom quizzes, virtual bingo, a game show evening, a talent show, cook-a-long, Halloween and Christmas socials and Taskmaster challenge! Members (who were able) donated their would-be club subs to charity, securing commercial matched funding to raise over £1,300 for Wood Street Mission, NHS Charities and Trafford Food Bank. At Christmas they donated toys and games to Wood Street Mission and volunteered to support with distribution. A big thank you to Manchester Korfball club where one member proudly proclaimed that “every person in MKC is a lockdown legend”. 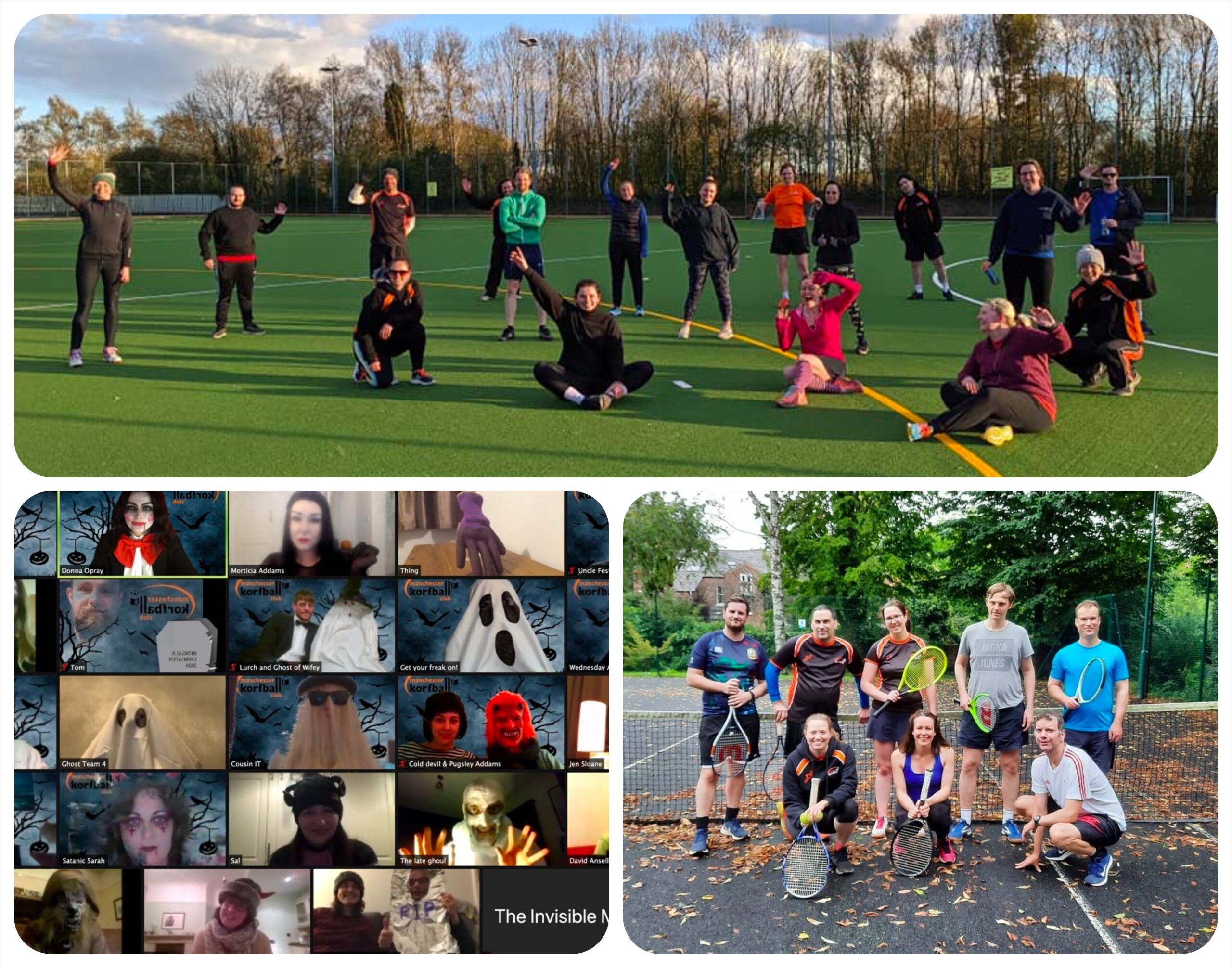 Natalie has been nominated as the members of her club have said she is the most “positive and inspirational coach a club could ever ask for”. Throughout the lockdowns she continually prioritised children and younger people by filming herself carrying out coaching sessions for children to participate in. These developed into online Zoom training sessions and then eventually small groups. These were carefully thought through, ensuring that children were motivated to take part. She organised an online awards ceremony whereby she carried out deliveries to individuals who had won awards and communicated with all involved.

Throughout last summer, Natalie organised her own training sessions, working around her own timetable so that the maximum number of children (with restrictions) could attend. She applied for park permits so that these could be done professionally and in a variety of places to meet everyone’s needs. She ran weekly Saturday zoom sessions and training sessions for other clubs too and coordinated and managed all return to play paperwork including completing risk assessments to make sure that it was safe and legal to do so. She has been meticulous in sanitising and making sure that rules and guidance are adhered to. Thank you for all your hard work and continually putting others before yourself! 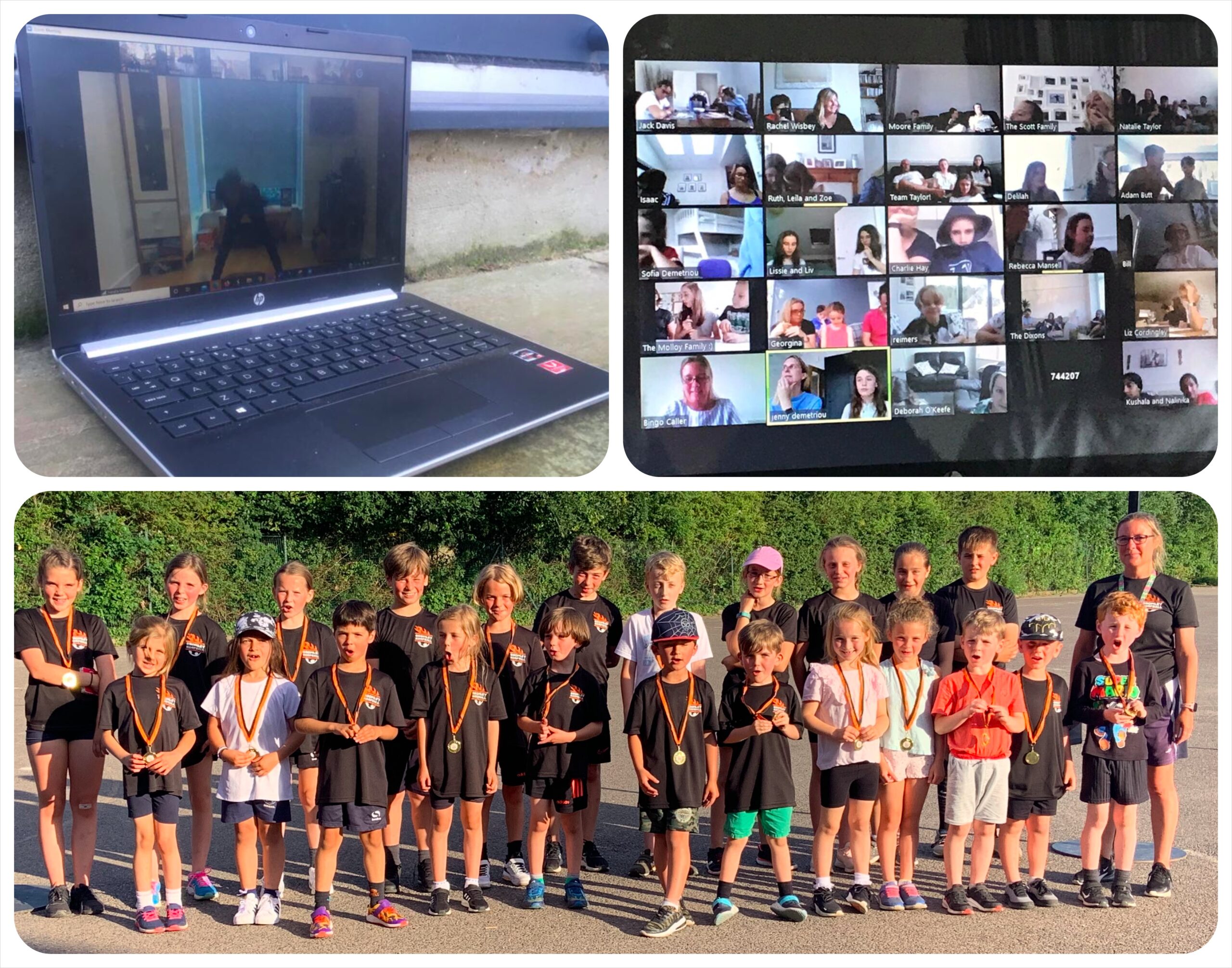 In March 2020 Nick singlehandedly distributed posts and balls to 13 households which allowed 25 senior and junior members to continue training during lockdown. He also organised weekly zoom fitness sessions to keep the club active which helped the club community stay in touch. As soon as rules permitted, he ran weekly outdoor sessions and hasn’t stopped since, from socially distanced sessions with just 6 players to the 30 strong a week they club has now. During the restrictions of six, Nick made time for 4 – 6 different groups, meaning that he committed 3 hours at a time for this purpose. He hauled posts all around Cambridge, setting them up by himself then and then led the session. The rules were very clear and safe in a time with a lot of uncertainty, which memes appreciated and valued. They were not allowed to touch the posts and each had their own personal ball which they would take home and always kept distance from everyone else. He has been the energy and the drive to ensure that members of the club had some korfball to play each week.

“He is too modest to blow his own trumpet, but everyone at the club is indebted to him for his time, energy and drive. Thank you Nick!” 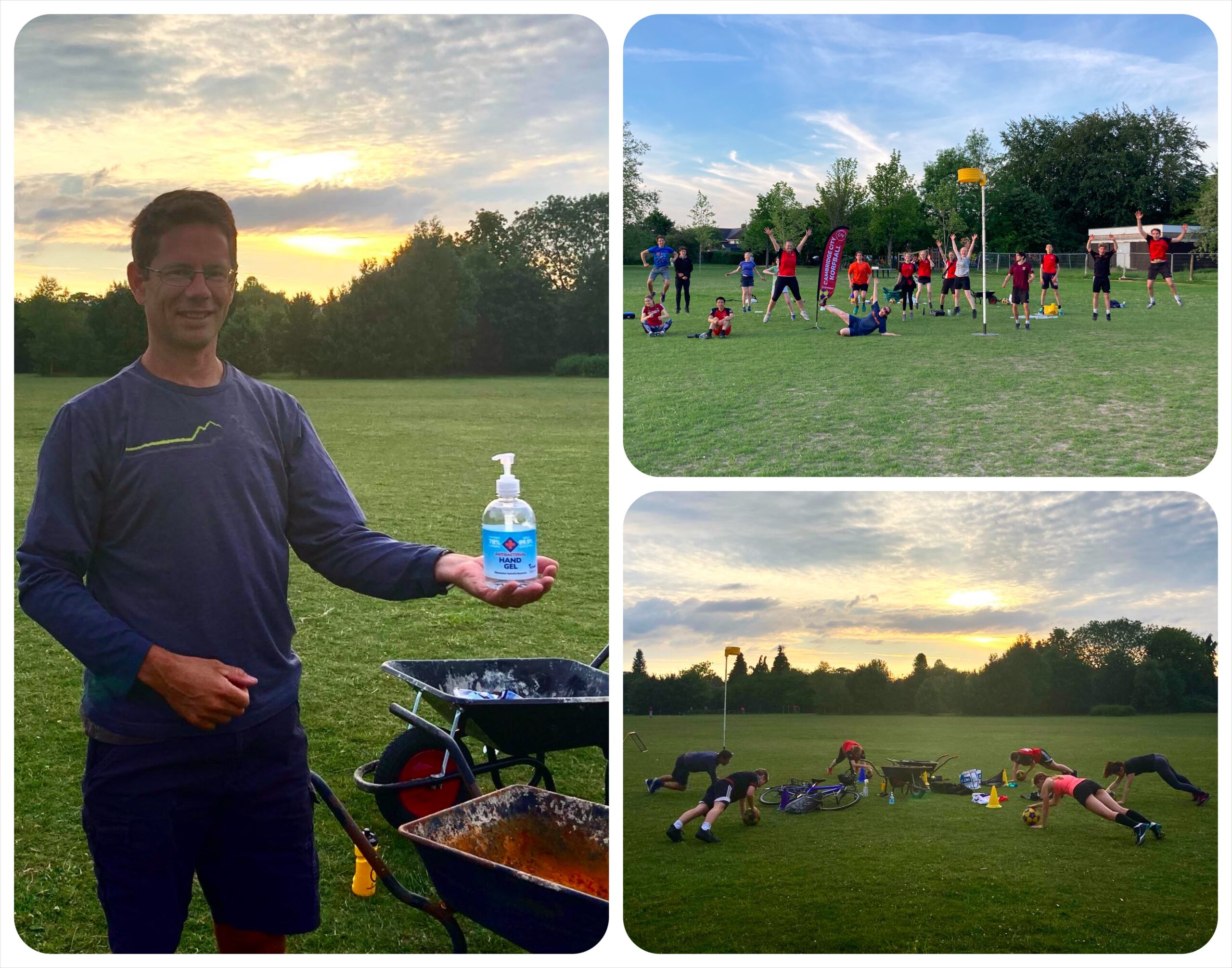 Stacey has been a consistent fundraiser over the pandemic. She planned, promoted, and organised the club’s fundraiser for the NHS in March 2020, in which the club raised £670! During the month of running challenges, she kept track of everyone’s totals to create a leader board for motivation, as well as a leader board between the teams for distance covered. In April 2021, she ran another fundraiser in which she walked 10,000 steps a day throughout the month and raised a further £931.25 for charity.

In addition, Stacey has always been a friendly face for newcomers and regular members at the club alike, running regular social meetings online throughout lockdown and COVID-safe meets once restrictions had been lifted. When training returned for the club, Stacey stepped up as the club’s COVID officer present at sessions. As part of this role, she ensured she knew the guidelines proposed for safe training and ensured that all safety and cleaning measures were observed throughout the summer. Stacey also devised our own online screening survey and remained a rock for people to talk to when they were feeling down due to lockdown. Thank you, Stacey! You represent all that is good in Korfball. 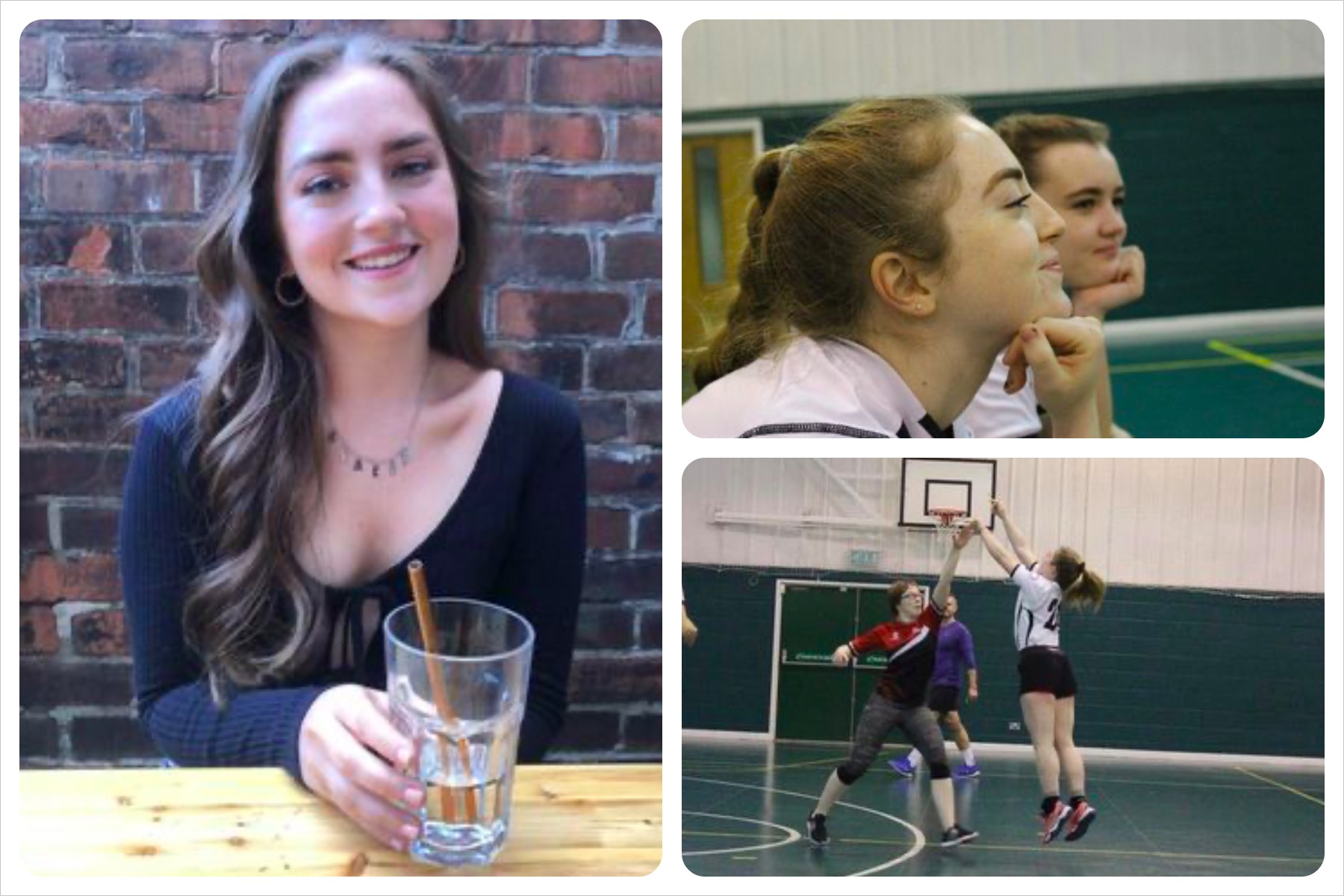 Thank you again to all our Lockdown Legend’s, whether you received a nomination or not. The past 18 months would not be the same without you.